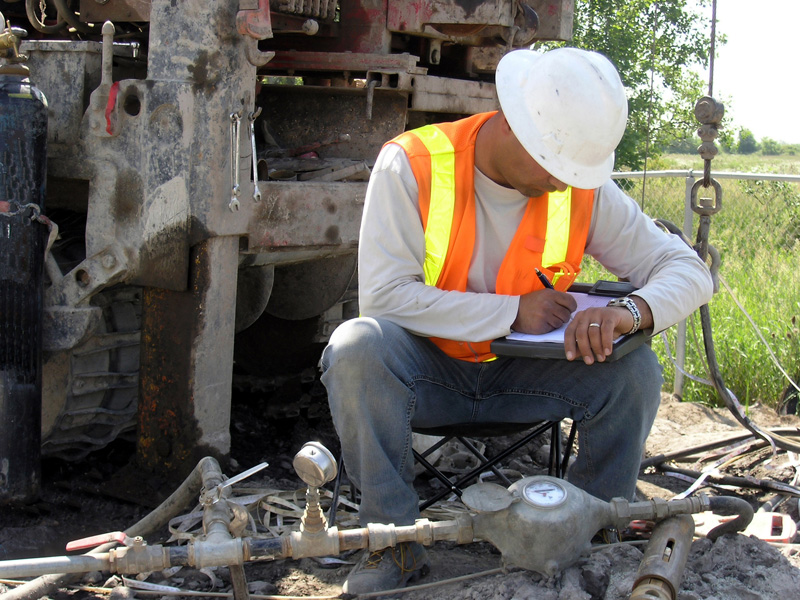 Magnetic particle (MT) is a non-destructive testing (NDT) process for detecting surface and slightly subsurface discontinuities in ferromagnetic materials. This process puts a magnetic field into the part, or the selected surface to be inspected. The piece can be magnetized by direct or indirect magnetization.

Liquid penetrant (PT), is a widely applied and cost-effective inspection method used to locate surface-breaking defects in all non-porous materials (metals, plastics, or ceramics). Penetrant is usually a dye of high contrast, and in some applications fluorescent.

Ultrasonic Testing (UT) comes in a variety of applications. Most commonly know for thickness testing of materials. For other applications the use of a sound frequency to propagate into a material that will detect any internal or at times surface breaking defects.

Straight beam inspection is most typically used for detecting eternal corrosion and laminations in a given material.

Angle beam or Shear wave technique is most commonly used for the examination of welds and more complex geometries. In recent years Phased Array (the use of multiple sound waves) has been taking over most of these applications giving permanent recording and a clear image of the defects present. This has been recognized as a sufficient application to replace X-Ray in several applications.

Visual testing is the most commonly used technique performed to identify defects in materials. All testing starts with a proper visual examination. Visually examining involves determining if the part is ready for the next stages of production, conforms to specifications/prints and meets the project's requirements.

Ground-penetrating radar (GPR) is a geophysical method that uses radar pulses to produce images of a subsurface area. This nondestructive method uses electromagnetic radiation in the microwave band (UHF/VHF frequencies) of the radio spectrum and detects the reflected signals from subsurface structures.

Vacuum Box testing and leak testing are techniques used to inspect piping systems and tanks for weld and general system leaks. Helium and other gases are pumped into a system and the outside is inspected with a detecting device to identify any gas escaping the system. Vacuum box testing is subjecting a system to negative pressure with a soap solution on the surface. By doing this any leaks are identified by bubbles from the leaking air showing up on the surface of the part.